The Business of Making Black Films: A Talk by Ava Duvernay and David Oyelowo 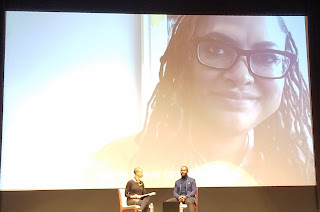 On November 29, 2017, Oscar nominated and Emmy award-winning director Ava Duvernay and acclaimed actor David Oyelowo joined Dr. Rhea I. Combs, Curator of Film and Photography, at the National Museum of African American History and Culture (NMAAC) in Washington, D.C. to discuss the business and creativity involved in making black films. The event was part of the Smithsonian’s 6th Annual Ingenuity Festival and Awards. Ms. Duvernay was one of eight award recipients that included notables like recording artist John Legend, astrophysicist Natalie Batalha and Apple technologist Jony Ive.* She attended the talk via Skype because her team had to pull an all-nighter to meet a post-production deadline for her upcoming 2018 release, A Wrinkle In Time. Duvernay is making history as the first black woman director to lead a film with a $100M budget. Mr. Oyelowo attended the session in person in the museum’s Oprah Winfrey Theater.

Making black films in Hollywood is a tough business. It’s not that there is a shortage of talent among the cadre of actors, directors and producers of color although this would not be known from the lack of recognition that they have received over the years from highly visible industry award shows. It’s that there has historically been a lack of opportunity and support commonly given to other mainstream films. Director Spike Lee recently posted a Thank You on Instagram to investors Michael Jordan, Magic Johnson, Janet Jackson, Tracey Chapmen, Bill Cosby, Peggy Cooper-Cafritz and Oprah Winfrey who helped him finish the “under budgeted” highly-praised biopic Malcolm X when he ran out of financial support from the Hollywood studio.

Ava Duvernay talks about making the film,
"August 28", for the Smithsonian.**

Black and women filmmakers alike are oftentimes hampered by road blocks like financing, distribution, and biases/prejudices of what type of films actually sell. Ava Duvernay addressed this by saying that she created ARRAY, which was first known as the African-American Film Releasing Movement (AFFRM), as a ‘defense mechanism’ or ‘survival technique’ to get creative works by people of color to their audience. I remember responding to her on Twitter when she was seeking theaters in the Washington, D.C. area to show her first film, I Will Follow (2010). Although she financed that film with her own money and cleared that hurdle, she still faced the next hurdle of getting the film to her audience. Social media was just beginning to have a significant impact and provide a path for directly communicating with fans and moviegoers. Her experience as a publicist working in the entertainment industry enabled her to get the film in front of some key critics like the well-respected Roger Ebert who gave her a glowing review and helped to create a buzz about the film.

African American moviegoers represent a sizable audience for films. According to a report by the Motion Picture Arts Association of America, African American moviegoers contributed $1.6B or 14% of the total $11.4B U.S./Canada box office in 2016. The key for filmmakers is getting a platform to reach this audience. If it’s a good film and black audiences know about it, box office hits like Fences, the $200M grossing Hidden Figures, and $100M grossing Girls Trip prove black films and films with diverse images can be widely successful.

By the way, Hispanics and Asian moviegoers account for 21% and 14% respectively of the total U.S./Canada box office receipts. Together minority moviegoers contributed 49% of all tickets sold in the U.S. and Canada. Understanding those numbers brings clarity to why The Oscars' (Academy of Motion Picture Arts and Sciences) responded so quickly to the #OscarsSoWhite Twitter campaign and accelerated their efforts to diversify their membership.

To make blockbuster films, filmmakers have to convince large corporations that their stories are worthy of the risk and investment of financing and distribution. For women and minorities, this task becomes even more arduous because they have to fight stereotypical images of what some studio executives believe minority and women audiences want to see on the large screen. When talking about getting Oscar and Golden Globe nominated Selma made, Oyelowo who was attached to the movie five years before Duvernay said that “they” felt that black people did not want to see “black pain” and white people did not want to feel “white guilt”. He personally lobbied to bring Duvernay on as director and Oprah Winfrey as an actor and co-producer.

Referencing Oprah Winfrey, Oyelowo said with her clout, influence and network, she has been able to provide a soft landing for black stories and creative works. “Without those soft landings, we will not be able to fully display who we are.” He went on to say that this is what black people in America have been lacking, a soft landing or a platform where our stories can be embraced and we can be “truly ourselves”. So it leaves us to wonder how this week’s announcement of Winfrey’s sale of 25% of her Oprah Winfrey Network (OWN) to Discovery Communications, giving them almost 75% ownership, will change and affect the “platform” she has built and branded since 2011. Only time will tell. Duvernay currently has a top-rated television series on OWN, Queen Sugar.

New platforms and distribution channels are emerging like Macro led by former WME Partner Charles King, and joining minority-owned networks like TV One led by Cathy Hughes; Aspire led by Magic Johnson; Bounce led by Andrew Young, Jr. and Martin King III and Sean Comb’s Revolt channel to provide a bridge and conduit for stories by people of color and women. We are assured though that the ingenuity of mavericks like Ava Duvernay will enable black stories and diverse films to find a way to their audience and black people will find a way to support and value those stories.

The Ingenuity Festival and events will run through December 30, 2017. There are special events for children. For more information, go to: https://www.smithsonianmag.com/calendar/2017-smithsonian-ingenuity-festival.

To listen to the full discussion between Ava Duvernay, David Oyelowo and Dr. Combs at NMAAHC, go to:
https://www.facebook.com/NMAAHC/videos/10154930846676990

**The short film, "August 28", written and directed by Ava Duvernay is currently showing at the NMAAHC. Those without reserved tickets for the museum may be able to gain entrance into the museum by standing in line at 1:00 pm, Monday -- Friday. Visitors are admitted as space allows.
Posted by Nona at 2:03 PM No comments: