How do you know when someone is telling the truth?
Posted by Nona at 8:19 AM 1 comment:

A Tribute To Big Mama (Reprinted from September 10, 2009--Grandparent's Day) 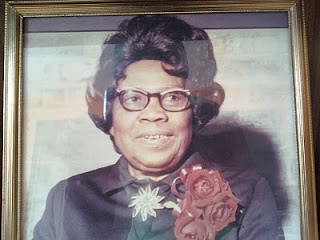 Today I want to pay tribute to the first woman who showed me unconditional love. I grew up calling her Big Mama. Her name was Elmira Thompson. I was born in February of 1965 in Norman, Oklahoma and Big Mama took me in at four days old. She was about 69 years old according to my calculations. Big Mama had already raised her children. In fact, she had five grown children, grown grandchildren and had been widowed for a number of years. But, her heart led her to take in a newborn. A newborn. Wow! That's amazing to me based on what I know about newborns. I don’t have any children but I have been around my friends when they had their kids and I spent a lot of time with them and their children. Newborns require a lot of attention. In the first two – three months, you are pretty much sleep deprived. Big Mama knew all of this and yet she opened her heart and home to care for someone else’s child who was no relation to her. That’s amazing to me.

At this stage in my life, I am forty-four years old, I reflect on this because I can now fully appreciate the kind of love she had and the sacrifice and commitment she made. She knew that this meant she would have to make bottles and do several midnight feedings. She would have to change “poop” diapers (I hate those) and stay up all night with a crying sick baby. She would no longer be free to come and go as she wanted because she had a baby now. Again. And speaking of diapers… In the late sixties, they did not have Huggies and a diaper “genie”. They were the diaper “genies”. The white cloth diapers they used had to be bleached and washed. No plastic disposable little Playtex fillers for them. Bottles had to be washed and sterilized. Yet, knowing all the work I would be, she still accepted the responsibility and opened her loving arms to me.

All of my memories of Big Mama are loving even though we went through some challenges together. Big Mama and I lived together in a small house in Sandtown, Oklahoma. Based on my recollection the house only had one bedroom. There could have been one more bedroom, but I’m not sure of this. She had an upright piano. I remember this because I spent a lot of time banging, I mean, making music on the piano. When I was about three years old, our house burned down. I guess I should say “her house burned down”, but I lived there and it was just she and I. So, it was “our house”. I can still picture some of the scene today. I am sure that that was devastating to her. She lost practically everything she owned in that fire. Thankfully, we got out of the house without any injury.

I have another memory of when I was about three or four years old of sitting in church and crying my eyes out because I had seen my sister (who is 11 months older) put a piece of Brach Butterscotch candy in her mouth. My aunt who was also Big Mama’s daughter-in-law and the Pastor’s wife, always gave us this type of candy as a treat. Well, this particular day she had given a piece of candy to my sister, Jackie, because she was sitting closer to her. I was on the other side of the church at the time and that’s probably why I did not get one. Of course, this bothered me because I felt like I was being left out. I immediately broke into tears. When Big Mama determined what was wrong, she reached in her purse and gave me a “church mint”. That’s what we call those red and white peppermints also made by Brachs. But that did not help. I wanted the yellow candy. So the tears kept flowing. Finally, everyone wanted to know what was wrong with me. Aunt Josie sent over a yellow piece of candy and I was fine after that.

I don’t have any memories of Big Mama disciplining me. I’m sure she did. I do remember one night that she got upset with me. She must have told me to do something or go get something. Apparently I responded with a smart remark. I don’t remember the details. But I do remember Big Mama running toward the bedroom to get a switch. On the way, she fell and did not get up right away. I rushed over to see what was wrong. Big Mama stayed on the floor. We were talking but it seemed like she could not get up. I remember crying very hard. Of course, I was sorry for whatever I had done, but foremost at that time I was scared because it appeared that Big Mama was hurt. You know that kids can sense fear and when something is wrong. I guess I was sensing that something was wrong with Big Mama. We were supposed to go to church that night but we did not go. Aunt Na (the woman I would later call Mama) pulled up outside and my sister came to the door to let us know they had come to take us to church. Big Mama was still on the floor but she was in a sitting position by this time. I was on my knees beside her. Jackie asked what we were doing on the floor and I said that we were looking for something. I was scared because I knew that if Aunt Na found out that I had done something to make Big Mama upset, I would get a beating. I escaped peril that night. Big Mama covered me.

The bottom line was that Big Mama's health was beginning to fail. I was five or six years old at this time. We were now living in a pink two bedroom house on 18th Street in Oklahoma City. It was soon after this that I went to live with Jackie and Aunt Na. Big Mama went to live with her daughter, Aunt Myrle, in Gary, Indiana. Big Mama lived several more years, but her health was never the same. She died in January of 1978 shortly before my 13th birthday.

I have very fond memories of her and I wished she had lived longer. Now, I can really appreciate what she did for me and I longed to show her my appreciation for her unconditional love and sacrifice. I regret that she died when I was so young. I shall never forget her. Big Mama was love.
Posted by Nona at 5:28 AM No comments: