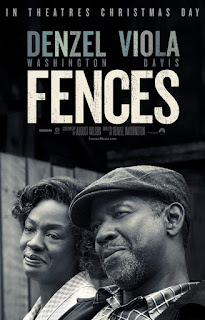 Opens everywhere on Christmas Day 2016
“Fences” is a great American movie in the tradition of American classics like "A Raisin In The Sun", "It's A Wonderful Life", "Imitation of Life" and "Malcolm X". Led by two-time Academy award winning actor, Denzel Washington, who also directed the film, and award winning actress Viola Davis, this brilliant cast of actors reprised their roles from the 2010 run of the play on Broadway. Washington, Davis and Mykelti Williamson breathed life into these characters in such a way that the audience is able to see the humanity of and identify with these complex but lovable individuals.
The story is set in the 1950’s and finds its main character, Troy Maxson, as a married father of two sons who lives in a two story house and works as a sanitation worker (aka a “garbage man”) in the blue collar town of Pittsburgh, PA. Segregation is very much the order of the day as black men are not allowed to drive the trash trucks. These jobs are reserved for white men. In fact, we see Maxson break barriers in the film as he is the first black man to be promoted to driver in the city. He’s a hero, right? Well Troy Maxson is a complicated guy with a heart of gold but a steel fist.
Rose Maxson, played by Viola Davis, is your everyday woman of the time. She’s a housewife that cooks, cleans, holds the family together and is active in her church. Her life would appear simple, but as it is in the real world, real life is never simple. Ms. Davis helps us see who the real hero and “stable one” is in the family even though she is married to a hard-working, responsible man who brings his entire paycheck home to her. Modern day feminists and womanists might look down on Rose for the choices that she made especially after she is betrayed. However, Viola’s Oscar-worthy performance helps us understand Rose’s choices and leaves us with no criticism for this character.
Mykelti Williamson plays, Gabriel, the disabled war veteran brother of Troy whose war injury settlement made it possible for the family to buy a modest home in an all-black section of town. Mykelti delivered an amazingly simple, but wonderfully nuanced performance of an individual with a mental disability. I loved the interaction between Lyons, Troy’s oldest son, played by Russell Hornsby and Gabriel. It portrayed the true love, patience and acceptance that you will find in families of an individual with special needs.
One of the overarching themes in this movie is how easy it is to become a victim to a cycle of pain even when you have fought hard to be nothing like and tried to get far away from the thing that has caused you so much pain in your life. The masterful performance of Stephen Henderson (Troy’s co-worker and best friend) shows us what it means to be a true friend in good and bad times. Jovan Adepo, Troy’s youngest son Cory, and Sanyya Sidney, remind us that love is not perfect but it can be beautiful if we allow ourselves to be open to the reality of love and not what we see in fairy tales.
Fences is truly an amazing story. It's an American story. It’s a family movie. Go see it Christmas Day! 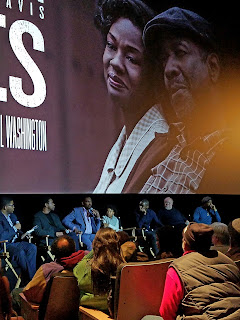 Check out this clip of Denzel Washington giving life advice at an advance screening of the film in New York City on December 18, 2016:
"Fight For Your Dreams"

http://motivationalmoments-vwo.blogspot.com/2016/12/fight-for-your-dreamsdenzel-washington.html
Posted by Nona at 4:10 AM No comments: 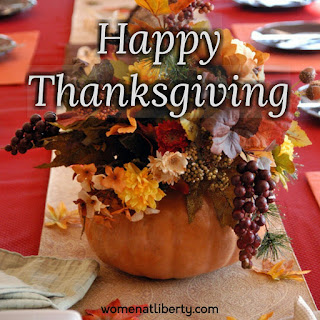 Faith Calls Us To Action...@vnona

The verse below calls people who say they are believers of Christ to action. "Make" is the operative word and denotes action. To see injustice, devastation and wrongdoing and remain silent is to give tacit approval to those situations.

Christians are called to be a people of faith and action (works). Don't preach to me about your faith if you remain silent on issues of injustice. Change for the better does not just happen by itself. Individuals are the agents of change. Healing does not just happen. Action is required whether internally or externally.

The paths we are called to "make" will not only benefit us but those who come after us if...we clear paths and train others to clear paths. 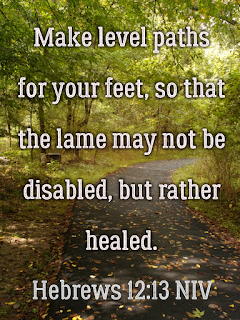 If you do the same things that they do, you are just like them. If you exclude people beause they don't think like you, you are a bigot. If you bully those who look different from you, then you are intolerant.

The end does not justify the means. You are just like them. 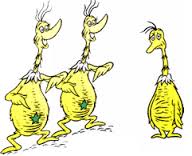 Can We Talk For Real?...@vnona

If you don't model what real love looks and feels like for your family (children), they will never know what to expect and require when it comes to committed relationships and love. Likewise if we don't model what love and respect means in the black community, and I highlight this community because that's the one I belong to and am most familiar with, then how can we require people who are not intimately familiar with the community to behave with more respect towards us than we demonstrate toward each other on a daily basis? To demand more of someone else than you yourself is willing to give is #hypocrisy.

This does not excuse any wrongful and demeaning acts toward members of our community. I'm just simply saying it's past time to shore up the foundation of our own house. 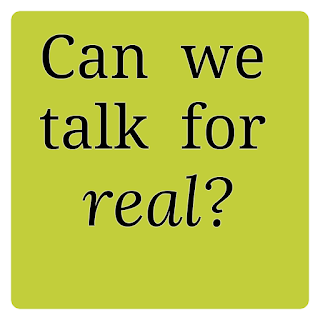 A Week Of Senseless Violence...What To Do Now? 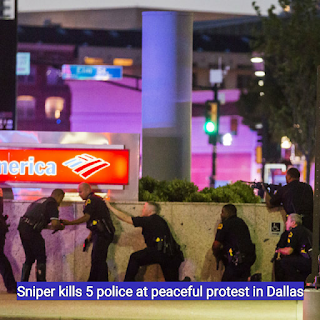 If you did not know any better when watching the images in the media of a peaceful protest turn violent when a sniper attacked police on Thursday night, July 7, you would think that America was in the middle of the same kind of civil war that has plagued the Middle East for the last 50+ years. The scene in Dallas as police scrambled to take cover from the gunfire could have easily been a scene in Iraq or Israel. America, who is arguably one of the most if not the most civilized nation in the world, is in crisis. 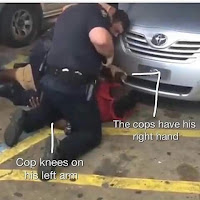 The chaos that has come to the surface as a result of the police shootings of Alton Sterling in Baton Rouge, Louisiana and Philando Castile in St. Paul, Minnesota, two black men, as well as the killing of five police officers* in Dallas, Texas on this week has been brewing for a long time. Police shootings like that of Mike Brown, Tamir Rice and LaQuan McDonald, and the deaths of Freddy Gray and Sandra Bland in police custody, all occurring within the last two years, have stoked the fires of anger and indignation in African American communities and those individuals who sympathize with them. 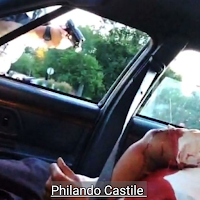 At a time when technology and social media has made communicating around the world as easy as shouting across your neighborhood street, our nation is experiencing the worst of times with regard to how we relate to each another. Police brutality seems to be on the rise and even with the recent videos of police dancing with kids in communities like Washington, D.C., New York City, and North Carolina, it has not assuaged the feelings of discontent that many feel as a result of the unexplainable deaths of black men and women at the hands of police or while in police custody.

We need change and we need it now. It starts with each of us. William Henry Johnson said, “If it is to be, it is up to me.”

Here are a few helpful steps you can take to get started bringing about the type of change we need:

*The Dallas police officers killed on July 7 were:  Lorne Ahrens, Michael Krol, Michael Smith, Brent Thompson, and Patrick Zamarippa
For more information on the sniper killing of five police in Dallas, see: http://www.usatoday.com/story/news/nation-now/2016/07/08/multiple-snipers-dallas/86839430/
Posted by Nona at 9:14 PM No comments:

Hitler, Idi Amin, Gaddafi wanted absolute power over people's lives without accountability and look at where it got them. Being mature, being responsible, and being a leader means being accountable for not only what you do but also being accountable for what people do who are under your leadership.

Only bullies, cowards, and the immature despise accountability. Be accountable! 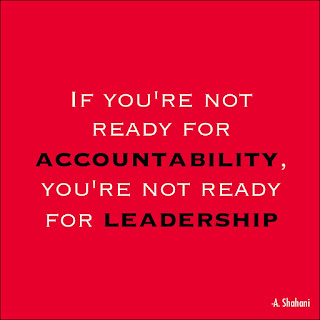 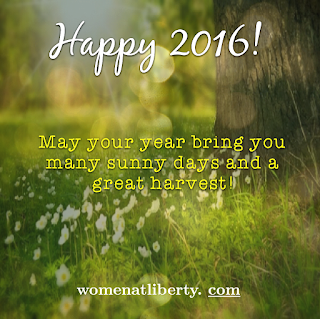