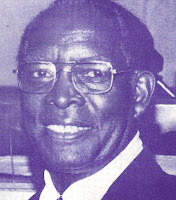 In 1972, Reverend Eugene Whittington married Naomi Chapel and became “Daddy” to me and my sister. Only a few days after the wedding, my sister and I went to our parent’s bedroom to ask if we could call him “Daddy”. Two giddy little girls, grinning from ear to ear, so happy to have a man to call Daddy.

Daddy was a rather quiet and mild-mannered man except for when he was preaching. He could get pretty fiery. Although a very strict disciplinarian, he had a way of showing you he cared. He loved young people and through programs at the church, he invested a lot of time in them. He took us across northern California to youth conferences and church services where our youth choir would sing our hearts out.


Two of the most important things that my dad taught me was, first the importance of getting a good education and secondly, tolerance for people of different denominations. My dad was the only “Church of God In Christ” preacher in the area who instituted a monthly fellowship service with a Baptist Church and another non-denominational Pentecostal church. In our area that was something special because churches of different denominations did not fellowship together, especially the Baptists and the Pentecostals. It had something to do with one or the other not being saved enough or the other being “too saved”.

However, one of my foremost memories is the yearly trip where my dad would take all the young people of the church to the area’s largest amusement park. This particular memory became the motivation for an email that I sent in 2006 to a childhood friend who also grew up in my father’s church.  Below is an excerpt:

My sister and nieces [from California] are here for a week and yesterday, I took them to Six Flag's Amusement Park.  We spent almost six hours in the park riding the rides and watching a few shows. The first ride we got on was similar to the "Water Log" we used to ride at Great America. This ride seemed like a baby "Water Log" compared to what I remember of the ride at Great America. However, it could have been that, in our young minds, the old ride seemed larger than it was. Anyway, as we went up the first incline and around the bend of the first hill, I thought with a bit of fear of the upcoming “drop”. Thirty years ago this was so much fun. We loved the Water Log. I don't know about you, but I think that was the ride that I looked forward to the most. We would ride it and then run right back to the line to ride it again. And boy, we felt cheated if we didn't get really wet!! Well, we definitely got soaked yesterday. That's something that technology has improved in the past 30 years. My jean shorts were still damp when I got home eight hours later.

The trip to the Amusement Park took me back to how much fun we had as kids. Going to Great America with the church was one of the biggest highlights of our summer. My dad instituted these yearly trips. He would load up the church van and with several cars in tow, we would be on our way to San Jose. And we weren't happy unless we were closing the park down--staying in the park until dark, having people hunt us down so that we all could leave together and drive back to Oakland. Yesterday, I intentionally gathered up everyone around 8:30 p.m., so that we could beat the traffic out of the park. But as kids, we had no concept of how it felt to be stuck in traffic after spending 8-10 hours or more in the hot sun trying to keep up with a group of rambunctious kids. My dad was a good man.


We had some great times, didn't we? Although all wasn't perfect, we do have some good memories.
Reverend Eugene Whittington founded a church in Oakland, California in 1949 and pastored it until his death in 1984. In tribute to him and his work in the community, the church where he served is named after him. 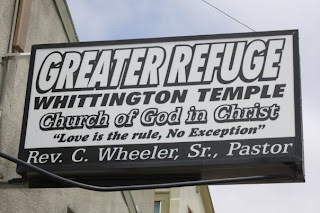 Tis So Sweet by Melinda Watts

Just wanted to share one of my favorite hymns...

Melinda Watts is the season three winner of Gospel Dream, the Gospel Music Channel's reality talent show.
Posted by Nona at 8:27 AM No comments:

During my teenage years, most of my friends were into singing, playing music, and songwriting. A few months ago the lyrics to one of the original songs that we sung came to mind. The song was written by a close family friend/cousin (if you're black you know what this means):

Christians should be the personification of God's love. The only way the world will know about God's love is if we demonstrate it to them in how we live our lives and how we treat them, help them, and love them.

"Let me give you a new command: Love one another. In the same way I loved you, you love one another. This is how everyone will recognize that you are my disciples—when they see the love you have for each other." John 13:34-35 (The Message Bible)

Leave a comment describing what love is to you. You don't have to be spiritual!  An example could be: Love is...a mother looking proudly and smiling widely as her child gives a speech or love is...hearing your grandparent tell a story for the 25th time but listening to it like it was the first time.
Posted by Nona at 8:50 AM 2 comments: